We travelled up in our new minibus on the Friday evening and got our tents set up on the campsite. By the time we had got all of the tents set up it was time for supper and bed to make sure that we were all ready for the races on Saturday.

Saturday started with a cooked breakfast before the leaders started getting the cars ready and the paperwork organised. The weather was showery but that didn’t delay the race with the first race at half past nine. Then someone from our group was racing in almost every other race which kept the leaders busy getting people into the right place at the right time. Our Cubs, Scouts and Explorers were very consistent finishing around 3rd in most of the sprint races.

Rudi posted the second fastest time for a Cub during the sprint events and Roan posted he sixth fastest Explorer time which meant for the first time we got a driver into the championship races.

After lunch we got stuck into the exciting Grand Prix races where in the team of four they had 15 minutes to post as many laps as possible changing driver every lap for cubs and every other lap for Scouts and Explorers. All of our teams did very well in the grand prix with good speedy changes. Unfortunately for the explorer team the chain kept coming off as a nut on the wheel had come slightly loose. We managed to fix it and continue with the race so congratulations to the Explorer’s for sticking with it. 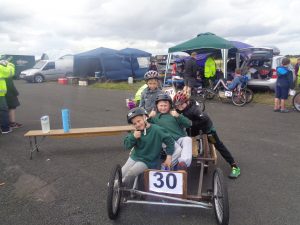 Once the races had finished we had our tea and then played games until it was time for bed. After waking up on Sunday we packed all of our tents away and headed home in minbus.

A huge thank you to all of the leaders that helped with the camp we wouldn’t have been able to do it without your help, and we look forward to next years races that will be held somewhere in Derbyshire.