It has been another busy month for Falcon Pack as they started the month by playing games on Hammersmith park and having a go at racing the Scout Cars around the car park on Asher Lane at the end of the night we invested Joseph one of the new Cubs who have just moved up from Beavers. The following week we started working towards the team work and team leader badges by designing  games that each six had to run the following week. We had some very good game ideas including obstacle courses, a new parachute game, head cricket and many more.

After designing the games the week after we ran the games that we had designed for the other cubs to play. Each six ran a game, with each cub having their own job which included reading the instructions and keeping score. By doing this we have got a lot closer to earning our teamwork and team leader challenge badges.

Lastly we spent a very wet evening at Trent Lock Scout Activity Centre in Long Eaton kayaking on the River Trent. We all piled in the minibus and drove down to get very wet. We learnt how to paddle forwards, and backwards as well as turn around. Once we had mastered these we played a game where the team holding the rubber duck at the end of the time won. 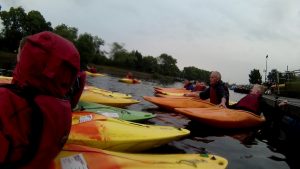 We have another busy month ahead with the Scout Car Races and the Drum Hill Cubs100 Adventure camp to look forward and a huge thank you to the leaders who have helped out each week. Roll on July and hopefully some better weather!